Despite having a wonderfully drawn out, gloriously golden summer, the days of swimming and grilling and short sleeves are now feeling like a distant memory. There is gold, still, but of a different sort: the leaves that tumbled into the kids’ hair as they ran rambunctiously through the park, the pumpkins – edible and ornamental – we’ve been selecting at every trip to the markets, the increasingly early sunsets that reflect off the distant Alps, turning the early snow into halos.  It’s a breathtaking time of year, but before we declare hiking season well and truly over let me take you back to what will probably be our last for the year.

It was a good one. 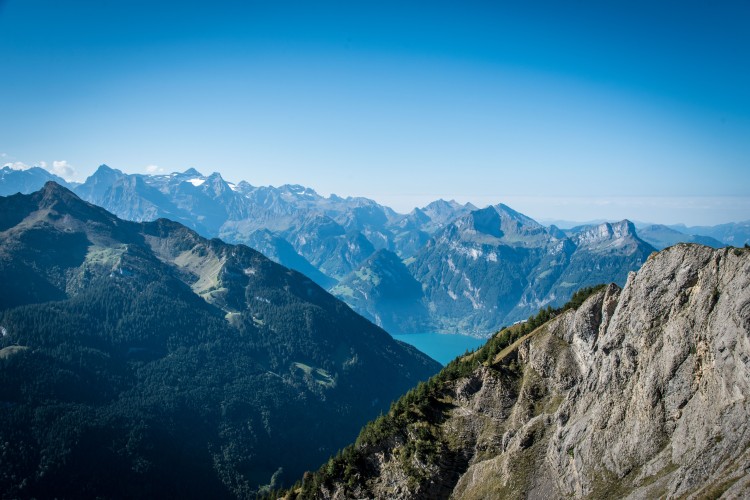 Almost a month ago (!), Tim’s youngest sister and her partner arrived in Switzerland. They had the better part of a week with us before heading off – we reunited later in Italy – and, if we agree to judge a Swiss holiday by the number of mountains scaled and amount of cheese eaten, theirs was highly successful. On what was forecast to the the finest day of their visit, we decided to tackle the Stoos Ridgeline hike.

Stoos, a mountain resort not far from us, recently built the world’s steepest train: the Stoosbahn (coincidentally, the train it pipped to the post is actually located in Australia’s  Blue Mountains, from which both Soph and Jake hail). An odd looking, caterpillar like series of circles, the train feels more like an elevator as it lifts you from the foot of the mountain to the top. It didn’t seem like it would work, entirely, so we spent the trip repeating our standard mantra: ‘Swiss engineering, Swiss engineering, Swiss engineering’. Safely deposited at the top we then had to get a ski lift to the start of the walk, much to the delight of the fearless kids and the terror of their mama.

The walk itself is short in length – about 5km – but since it spans the ridge between two peaks and drops and rises quite a lot, it took us quite some time to hike it (two children in backpacks didn’t speed us up any. While Addie is a very good walker, the drops were so steep at points that I didn’t trust her tired little legs to stay on the path. I only saw one child around Ads’ age walking it – a rope had been tied around her waist and was firmly held by the accompanying adult in case of any slipping). 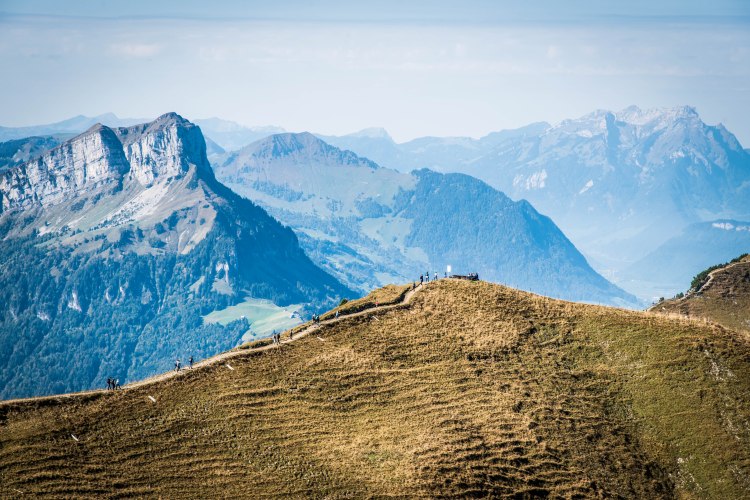 While a little challenging (my rickety old knees weren’t delighted with the descent plus 15kg toddler on my back), it was easily the most stunning walk we’ve done to date. 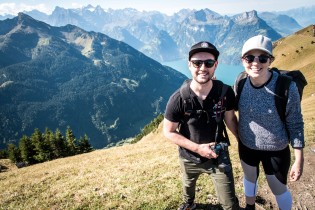 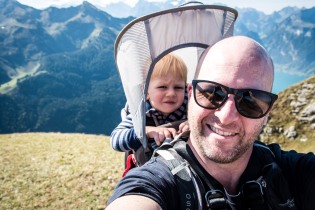 Thankfully, Uncle Jake took one of the brats (little Teddy, who I swear I overheard attempting to say ‘Jake’ in his lispy little whisper) for the final climb to the end of the hike (a bar! restaurant! playground!), leaving me free to ogle the landscape in peace (by which I mean huff and puff).

(In the picture directly below, if you follow the water around to the far left, hidden behind the peak are the islands we visited on Swiss National Day. The large deep blue body of water throughout the snaps is Lake Luzern – Vierwaldstättersee – and this is where it meets the Reuss river at the delta. We didn’t realise it was the same spot until right at the end of the hike where our perspective shifted into place.)

She’s an unusual lake, the old Vierwaldstättersee. The name translates as ‘lake of the four forested settlements’ (vier = four, wald = forest, stadt = town and see = lake), and this is really only obvious when you view her sprawling, tentacled form from above. Our own little slice of the lake – a few blocks from our apartment, where we walk and roll down hills and swim and grill and smell second hand weed and watch tightrope walkers tumble (maybe due to said weed) – seems like a completely different world when we look at it from this angle. 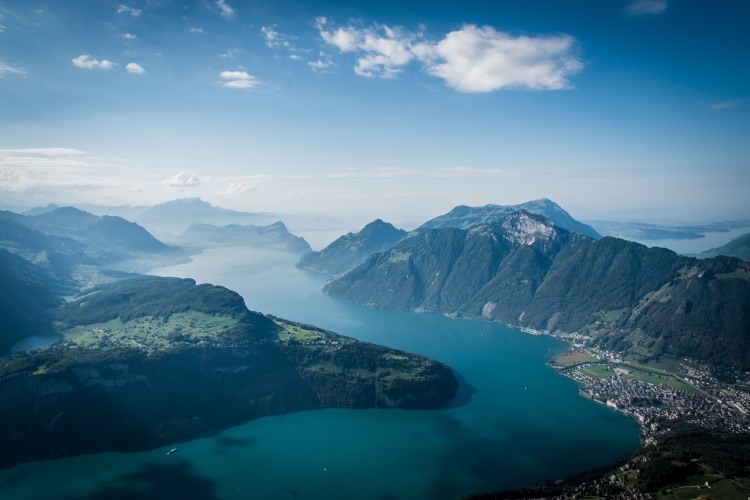 It’s hard to imagine from the snaps above, but the very next day Soph, Jake, Tim and Addie went up Mount Rigi and were greeted with a heavy snow. In the weeks following this hike the days have shortened and darkened, and the temperature has dropped dramatically. Snow is falling on the peaks and sticking on the higher ones (and scarily it’s forecast for Luzern town – typically on the day that Addie and I are due to run our ‘races’ – a half marathon for me and an adorable 195m for her). Autumn is unquestionably here.

One thought on “Walk the (ridge)line”