We moved fairly quickly after Seville, having only one night in four different towns as we – perhaps foolishly – started moving north for the winter. The towns were chosen based on convenience for our trip (we didn’t want to drive too far each day but we also didn’t want to stay in places that we either too large to discover or too small to feel busy), and as such we embarked on something of a holiday lucky dip.

Happily for us, the first of the last stops was a surprising stunner: Salamanca. 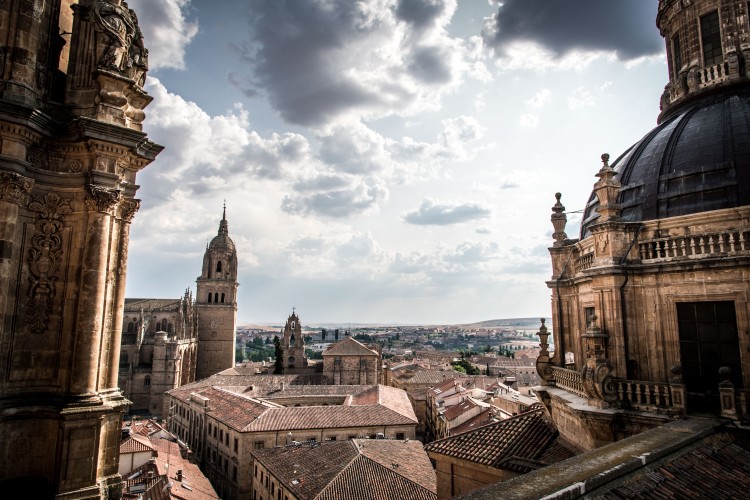 A university town, Salamanca is a town built in – and at times it looks like carved from – sandstone. We spied it in the distance long before we arrived; a town barely discernible from the lightly coloured rocky terrain (erm, that sandstone?!) around it other than its ornate peaks rising into the sky. As we approached, the city’s walls were visible: ancient Roman fortifications that, along with the river, have been turned into an enormous green space for the town. We made our way to the car-free old town where we wandered the streets and climbed the bell tower and soaked in the wonderful atmosphere.

As the kids were exhausted from a long day, we took them for their daily holiday ice cream in the magnificent town square (yup, we’ve become those parents) and then tucked them into bed. I stayed and held the fort while Tim hit the town and did what he does best: drink whiskey (actually, take photos. But you’d best believe he stopped for a treat for himself along the way). 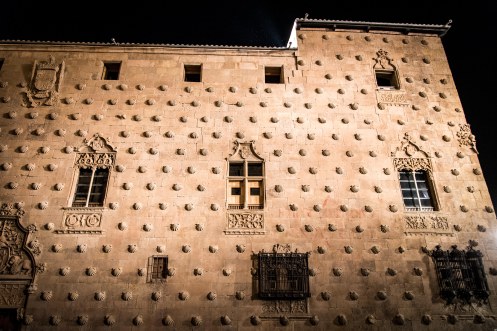 The next stop en route home: Pamplona. Another city chosen for convenience, we were again pleasantly surprised (but not wowed like Salamanca). We stayed in an attic apartment at the top of the old town, and our very helpful host directed us to local treats: the chocolate pastries from the bakery next door, a bar built into the city walls with stunning views across the nearby sprawling hills, and a pinchos bar where we ate tiny Spanish snacks to finish off the night. We were about a month later than the town’s famous bull-running, but it was easy to imagine the mayhem that would occur through the streets.

Our own running continued. Toulouse, known as the pink city due to the terracotta used to build the old town, was our next stop. The adults enjoyed a wonderful dinner and would have liked to spend more time checking the town out, but the allure of the swimming pool in our hotel was too much for the smaller people. Our final stay was in Valance – the French Valencia – which felt like it rounded out the trip nicely.

As we drove northwards it felt we were leaving the summer behind us. Temperatures began dropping, and by the time we hit Toulouse the leaves on the trees lining the pink canals had started to turn. Our final day’s drive – from Valence back to Luzern – was filled with gloomy skies and rain: autumn had arrived while we had been gone.

The last week since we’ve been home has been one of small adjustments and tweaks. Addie has started the new school year with an increase in her activities: four days of kita and playgroup, including her favourite weekly forest visit. Swimming season is definitely over although we managed an optimistic chilly dip a few days ago, conscious the entire time that it was likely our last until next year. Luscious summer fruit is long eaten and the apples and pears have arrived in force, as have the pumpkins (much to our girl’s delight. She ate four – FOUR! – bowls of Golden Soup the other night and promptly asked for it the next morning for breakfast). The mornings are grey and chilly and the afternoons have the rich glow of a tired sun. I love Autumn, and I love the indulgent melancholy of seasonal change (and I, like my daughter, love pumpkin soup) but somehow it seems hard to embrace it. We had a magnificent summer – my favourite yet – and I guess I’m not quite ready to let it go. Then again, the lake was bloody freezing, so maybe I’ll just make a hot chocolate and be done with summer after all.