It may surprise you to know that I am quite a sentimental kind of person. I can’t let a festive season pass without viewing (preferably on multiple occasions) ‘It’s a Wonderful Life‘ and there’s a Dire Straits album that was oddly slotted into my teens that will reduce me to tears if heard unexpectedly. There’s a ridiculously large box of child-related paraphernalia that I cannot bring myself to cull and I live in genuine fear that Posh and Becks will break up. But nothing brings on self indulgent melancholy like good ol’ Autumn. I’ve been wandering around for the last few weeks fairly misty eyed over the turning leaves, the chill in the air, the darker nights and the mellowing of the light (although this morning, against my better judgement and for reasons I am unable to articulate, I tried a Pumpkin Spice Latte. I was almost cured of Autumn Love right there and then. Yikes).

Earlier this month was the two year annualversay of our move to Switzerland, further impetus for reflection. This year I celebrated by making good on my FOMO. A few months ago, at the start of summer, Tim had climbed Mt Pilatus with some colleagues. I was hideously (cough childishly) jealous and, on Motsy’s urging, decided to give it a go myself. Despite having nowhere near the level of fitness required to scale the 2,128m mountain, it turns out I’ll do anything to get a morning away from the brats. A friend and I took it on, and after almost four hours of solid upwards hit the peak. Although the nicest day of a bad bunch, the mountain was still covered in heavy fog as we climbed. It made for poor visibility but given the scrambley nature of the path we took and my fear of heights, it was possibly for the best. Tim and said brats met us afterwards for a grill, where we cheersed to two years well spent (and it’s lucky arms are used for cheers-ing, as lord knows my legs were not up for anything much after that hike). 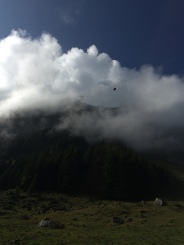 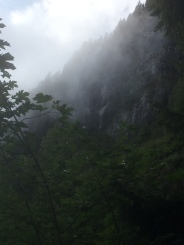 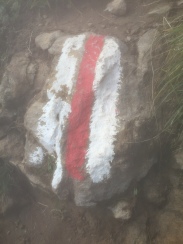 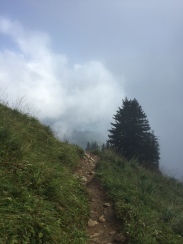 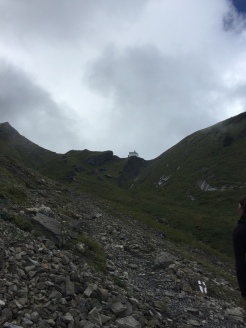 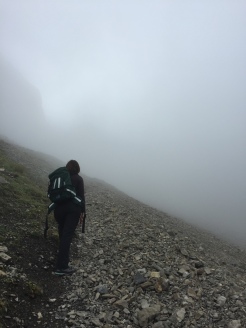 The last two years have gone swiftly. Theodore – who of course wasn’t even remotely on our agenda at the time – is now the age that Addie was when we moved here. In those early days, we looked around at childcare options and found that a lot of the playgroups were only accessible for ‘older’ kids – starting at about three years. I didn’t think too much more of it until it hit me a few weeks ago that, completely obviously but also somehow impossibly, my little daughter is now almost three. The horror of this discovery was counterbalanced somewhat by the parallel realisation: I can offload her to spielgruppe! And to spielgruppe she went: Swiss style. 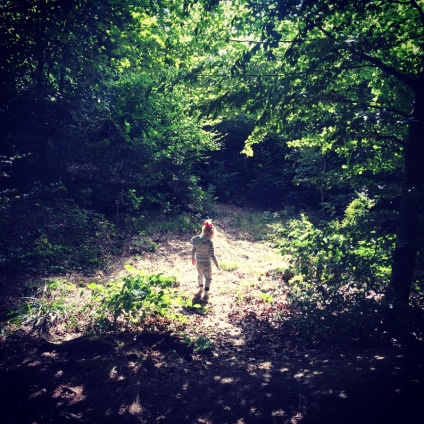 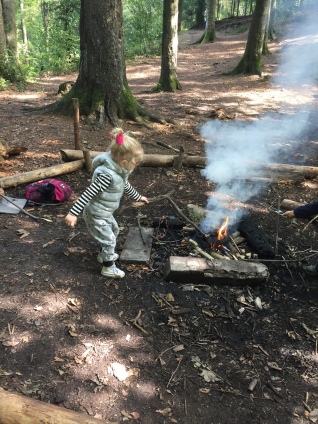 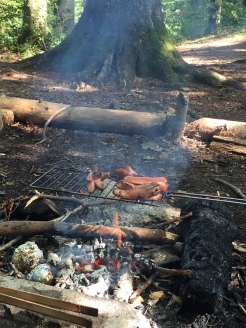 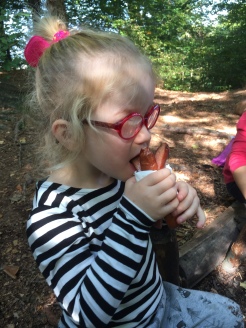 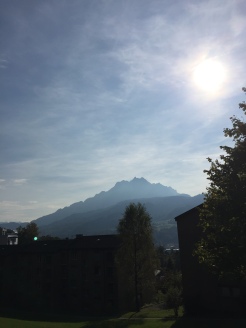 Waldspielgruppe is forest playgroup, where the kids toddle off to the woods for the afternoon. They forage for wood, build a fire and play with knives, cook and eat cervelat (a sausage that Tim and I liken to vegemite: divine if you grow up eating it but absolutely vile if introduced to it later in life), and generally have a fabulous mucky time. Addie had her induction last week so Teddles and went along for the ride, but she starts solo this Friday and could not be more excited. It’s both thrilling and heartbreaking to see how grown up she is, and to watch her chatting to the leader and the other children in a language I can barely understand made me grateful once again for the opportunity we’re getting here.

To capitalise on her new skills – and to marvel at the newly fallen snow and the gradually changing foliage – we took a wee family hike yesterday. We went to Elm, about an hour and a half from Luzern, took a quick cable car up the mountain and did the Giant’s Playground walk. Our surly looking little bear has RBF, like his sister before him, but was actually very happy to be out on his papa’s back. 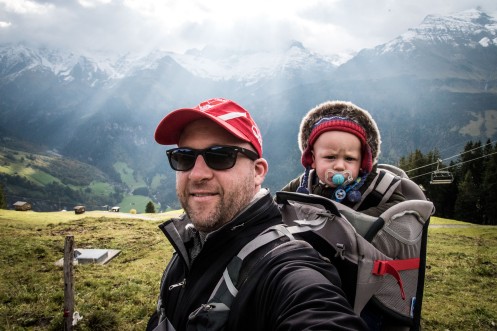 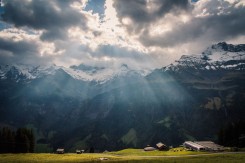 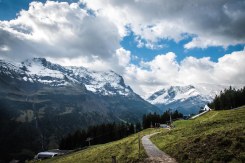 It is ludicrously easy to get outdoors here. Swiss efficiency is astounding. Cable cars take you to seemingly inaccessible peaks, where there are nearly always comfortable places to sit and rest, family friendly walking tracks to follow, and fireplaces – stocked with fire wood – to grill your lunch. This walk was only just over 2ks, a perfect distance for the littlest walker, and had an activity site every few hundred metres which was just enough to inspire little Addie along. 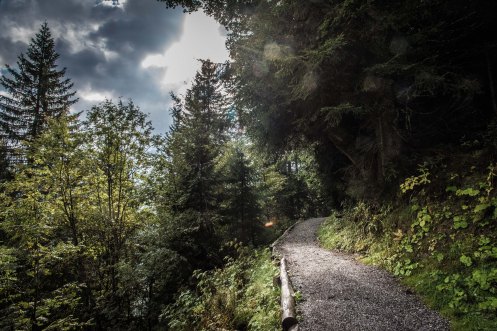 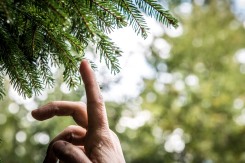 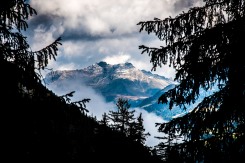 We stopped for lunch where Addie abandoned all waldspielgruppe learnings, leaving the fire-building duties to the lads in the family, instead joining her mama in a far superior pastime: salami and cheese consumption. 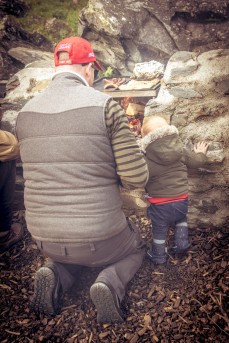 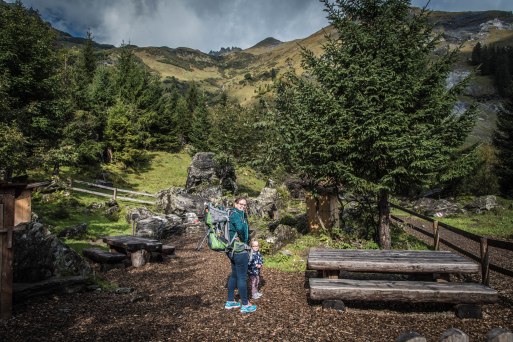 Lunch consumed, we continued the loop trail along – marvelling at mushrooms (and someone’s Sporty Suit) and as always the ridiculous view. We get out and hike a fair bit, but this was the first trip that we felt was well executed. Planning and timing went without a hitch, the walk was perfect for our family, and our grill game was strong. As we made our way back to the cable car (and the massive outdoor trampoline area that was a sure fire Addie approved activity) we were, I confess, fairly self congratulatory. 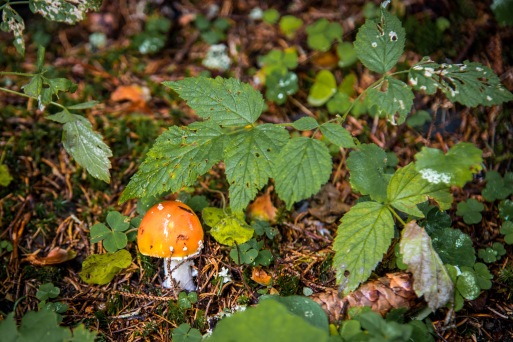 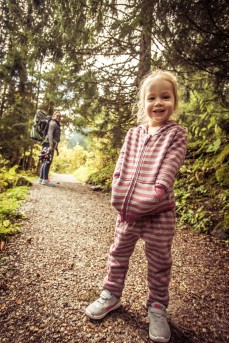 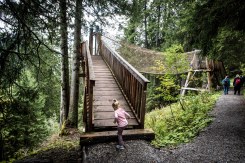 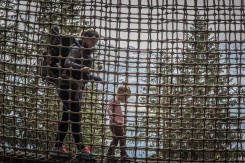 Although Tim’s contract here is permanent and has no formal end date, we’d always had in our heads that two years was the time we’d commit to staying. Almost as soon as we’d jumped off the plane we figured we’d be staying longer than that, given how much exploring there was to be done. We have a long and lovely trip to Australia planned over Christmas, so we’ll see how much good food, coffee and weather influences us, but it’s hard to imagine leaving here any time soon. I mean: 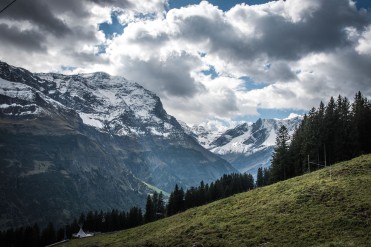 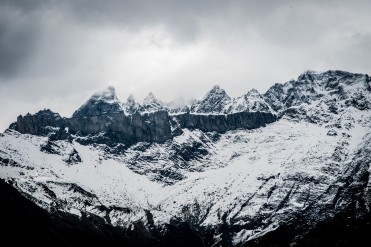 Besides, if we’ve only started to nail our hiking game after two years, imagine how we’ll bring it next summer.

One thought on “Bring it”