For the last – I don’t know, decade? – I have kept seasonal to-do lists (amongst the plethora of other to-do lists I maintain, primarily to avoid actually to-doing, a lot of the time). They are usually fairly seasonally predictable. Stews and shiraz in winter, a cold weather hike perhaps, always more reading, preferably in snuggly surroundings. Autumn usually includes some sort of produce picking (apples, maybe, or pumpkins) and spring is picnics, picnics, picnics. Summer’s easy: more swimming in lakes, please, maybe some camping, and all the stone fruit possible (perhaps even incorporated into some sort of tasty beverage if creativity allows). Since the days here have – finally, happily – hit the thirties, I in turn hit last year’s summer list, and found a little non-actioned gem waiting for us: Jucker Farm.

Just under a (very screamy) hour away (why do we keep having children who hate the car?), the working farm is fully prepped for summer thrill seekers such as ourselves. Animals? Tick. Produce aplenty? Tick. Coffee and delicious eats for tired parents and cranky kids? Tick and tick. Rusty tetanus threatening tractors for two years olds? You betcha! 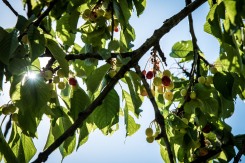 It’s asparagus season here – the Swiss are mad for it, apparently (according once again to our source of all knowledge Swiss – our German teacher) – and not only did we find loads of fresh farm-grown spears but also an astounding array of asparagus-related condiments. I was not aware that asparagus salt was a thing until earlier this afternoon. 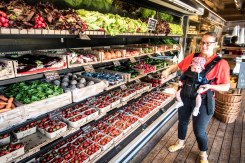 Either way, some of the crankiness got left behind as we explored…

…and found not one, but three apple orchard mazes. Each, as the saying goes, more difficult than the last. The first had us doubling back a fair bit, during which time we discovered a scarecrow and a giant golden apple in the centre of the maze. 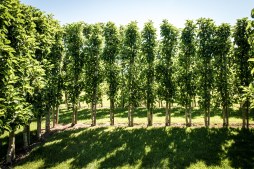 The second was circular, and as such had us a little confused (and my little miss tempted to cheat). The centre of this maze had golden sticks of cinnamon dangling from a tree.

The final and largest maze, which was over a kilometre long, we attacked with a game plan: a picture of the map prior to starting and a path worked out (which may not have been in the spirit of things, but certainly helped move the maze show along). This one revealed a novelty sized golden spoon as its centrepiece. 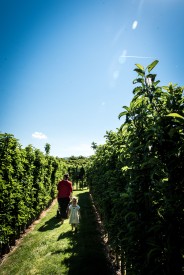 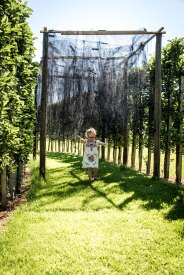 I can only assume that giant gold apple plus giant cinnamon sticks plus giant spoon equals giant apple pie feast.  No wonder Tim looks so excited at having solved it. 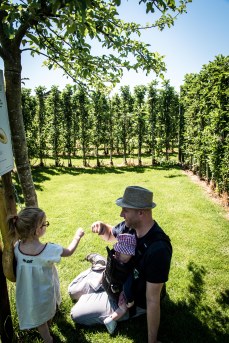 Despite our best intentions – and a delicious looking specimen right next door – we didn’t quite manage to tick ‘swim in lake’ off our list quite yet. However, for this summer at least, Jucker Farm can be marked as done (although I may have to return once we run out of said salt).